The launch of the Mir payment service in Russia managed to break Mastercard’s and Visa’s long-established duopoly in the debit card market. Mir’s government mandate-driven dominance will continue going forward and could act as a blueprint for other domestic and regional payment networks.

GlobalData’s report, Russia Cards & Payments: Opportunities and Risk to 2024, reveals that the payment service Mir – introduced in Russia in late 2015 – is carving a place in the market as a serious payment service provider. As of 2020 it accounted for 28.62% of all debit cards in circulation in Russia, just behind Visa (30.2%) and Mastercard (37.9%)

Russia is determined to reduce the influence of US payment providers in the country. In order to achieve this, it is strategically promoting the adoption of Mir via government mandates.

To accelerate adoption among merchants, a mandate was passed that required merchant stores with annual transaction turnover of more than RUB40m ($0.5m) to accept Mir cards.

The sanctions imposed by the US and the EU over the Ukrainian crisis in 2014 were a catalyst that forced Russia to introduce its own payment service to reduce its dependence on US payment providers.

In contrast, Mir’s share rose from just 0.7% to 25.3% over the same period. Mastercard and Visa can expect to see their market shares decrease further in the coming years as the government will continue to pass mandates to support the adoption of Mir cards across the population.

Taking a broader view, the growth of a domestic scheme like Mir is an example that other countries can follow if they want to break Mastercard’s and Visa’s duopoly in their territory.

Governments can introduce payment schemes and take over the domestic transaction landscape by driving adoption via mandates and regulation. Indeed, this could be the model the European Commission follows when it launches its own payment scheme, the European Payments Initiative.

Mir’s strong adoption is being driven by government mandates that force merchants to accept Mir payments and consumers to migrate away from Mastercard and Visa cards.

The Russian government will continue to pass laws that will accelerate the adoption of Mir throughout its territory and reduce the influence of US payment providers. The loss of their dominance at a domestic level will force Mastercard and Visa to focus on their role as international payment schemes and scale-up their networks.

This will make them valuable partners for co-badging with domestic schemes, especially for payments to other countries, as domestic schemes such as Mir cannot offer cross-border transactions. 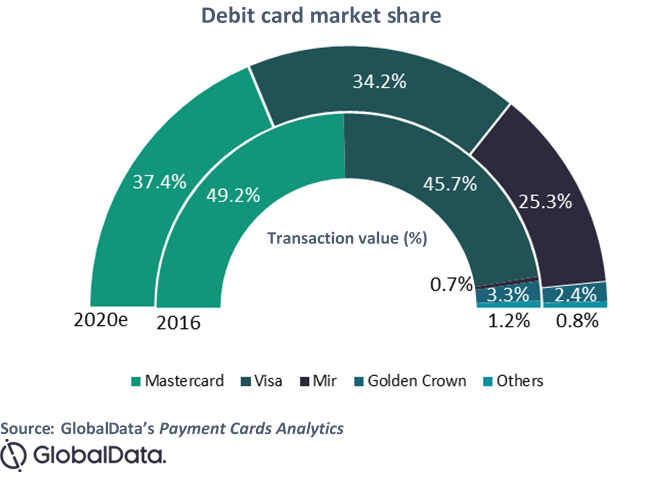 This was written by Chris Dinga, GlobalData Payments Analyst.