Japan’s payment landscape continues to be dominated by cash, which accounted for 76.2% of the overall payment volume in 2018.

With government initiatives to promote electronic transactions and growing payment infrastructure, payment cards gained prominence between 2014 and 2018. The upcoming 2020 Olympic and Paralympic Games are also expected to provide an impetus to the country’s cards and payments industry.

To supplement these global events, all the country’s major banks are making their payment infrastructure compatible with foreign-issued payment cards, and are also installing ATMs at locations with high footfall, such as tourist attractions and supermarkets.

Meanwhile, card issuers and payment service providers are focusing on developing the payment infrastructure via expansion of the acceptance network.

In addition, the market is witnessing new developments encompassing payment card security and convenient payment solutions, with card issuers and technology companies experimenting with advanced technologies such as blockchain and biometrics. 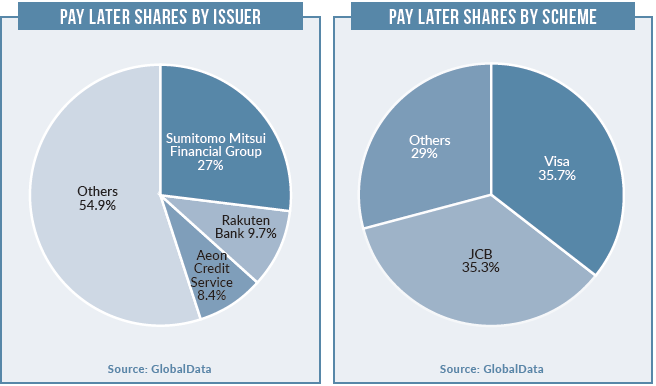 Debit card penetration is very high in Japan, with each individual holding over three cards in 2018, supported by the country’s strong banked population.

However, debit card use has been mostly confined to cash withdrawals at ATMs; they are rarely used for payments. Overall, ATM cash withdrawals accounted for 87.9% of total debit card transaction value in 2018. This is, at least partly, a result of limited awareness among consumers about the ability to use debit cards at POS terminals.

Debit cards are also unpopular with merchants due to their longer settlement period. Payments conducted via J-Debit cards are settled in merchant accounts in three or more days.

Despite having a lower rate of penetration than debit cards, credit cards are the preferred card type, accounting for 98% of the total payment transaction value in 2018.

Credit cards are the most popular payment card type in Japan, due mainly to the associated reward programmes, which are considered far more beneficial than those offered for debit and prepaid cards.

Another important factor driving their use is the wider acceptance of these cards among merchants, with credit cards now accepted across all types of retailer. Issuers have partnered with merchants to attract new customers, as well as launching co-branded credit cards.

Japan is one of the few countries with a crypto-friendly regulatory regime, and has officially recognized Bitcoin as a legal payment instrument since April 2017.

The gradual rise in cryptocurrency acceptance at merchant locations can be seen as an upcoming trend in the country, with merchants increasingly opting for this method of payment due to benefits such as lower transaction fees, no chargebacks and cheaper payment acceptance from foreign tourists.

The Japanese prepaid card market is mature, with a high penetration of three cards per individual. The market registered strong growth between 2014 and 2018, with local issuers offering a range of prepaid cards.

Contactless technology has been developed to meet the needs of public transport users. One of the most popular prepaid smart cards in Japan is the Suica card, which is owned and operated by East Japan Railway. The card, which was originally launched as a contactless transit pass, has since expanded to cover payments at vending machines, shops and restaurants.