Cash dominates the payments landscape in Mexico, accounting for 89.5% of the overall payment transaction volume in 2018.

The central bank and financial institutions have taken steps to boost financial inclusion, such as insurance cover on deposit accounts, and the availability of basic and payroll accounts.

To increase merchant acceptance, the central bank has capped interchange fees on debit and credit card transactions, while banks are reducing merchant discount rates. While debit card penetration is relatively high, the cards are mostly used to withdraw cash from ATMs.

Pay-later cards are used more frequently for payments. Contactless cards and mobile proximity payments are not widely used in Mexico, although major banks have made attempts to boost their adoption.

The government undertook the Savings and Credit Sector Consolidation and Financial Inclusion Project between 2012 and 2017.

The project provided financial education to 1.8 million individuals and encouraged Mexicans to open new deposit accounts – with a total of 9.5 million members insured by deposit insurance in 2017, compared to 6.1 million in 2011. 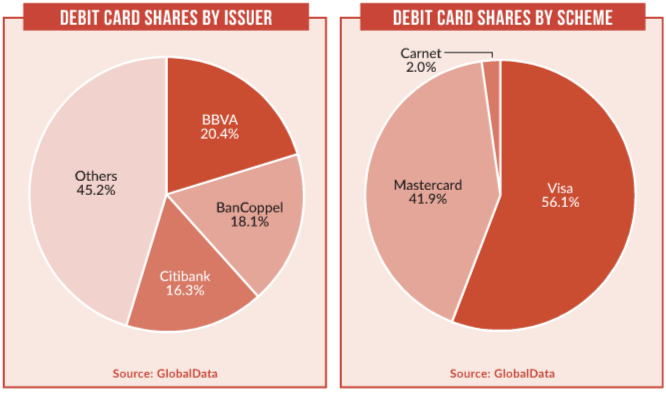 The model operated in the Mexican banking and payments system is very different from those of the country’s peers.

As of December 2017, over 9 million Saldazo debit cards had been issued through Oxxo stores. Similarly, in October 2017, Amazon introduced a cash payment service that enables Mexicans to load Amazon account balances at 7-Eleven stores.

Mexico is the largest e-commerce market in Latin America. The market recorded significant growth between 2014 and 2018, supported by rising internet and smartphone penetration, improving consumer confidence, and an increasing number of online retailers.

In March 2018 Amazon introduced a Mastercard-branded prepaid card, Amazon Rechargeable, which enables users to load money through convenience stores such as 7-Eleven, and can be used for purchases at Amazon’s online store.

Mexico’s prepaid card market, though nascent, grew at a moderate pace over the five years to 2018, at a CAGR of 6.6% in terms of transaction value.

The high unbanked population, the disbursement of social welfare through prepaid cards, and the availability of remittance cards drove the overall prepaid card market between 2014 and 2018.

Convenience stores are also an important channel for the distribution of prepaid cards in Mexico.

Prepaid card providers are partnering with leading chains such as Oxxo and 7-Eleven to enable the distribution of prepaid cards; for instance, 7-Eleven offers prepaid cards for iTunes, Amazon, Netflix, Playstation and Uber.

The number of POS terminals registered a CAGR of 7.6% between 2014 and 2018. Mexican banks are collaborating with mobile payment technology vendors to deploy mobile POS (mPOS) terminals at ‘mom and pop’ stores, as they are typically more cost-effective than traditional POS terminals.