Credit card debt in the United States has plummeted since the Covid-19 crisis started, according to the most recent data from the Federal Reserve.

The amount of revolving consumer debt, which is primarily made up of credit cards, fell below $1trl in May 2020 for the first time since May 2011 during the Great Recession.

The contraction of credit card debt may seem implausible given the pandemic’s effect on the economy.

The domestic unemployment rate is stuck in the double-digits and the gross domestic product (GDP), one of the most widely accepted indicators of the nation’s overall economic health, down approximately 5% in the first quarter of 2020 with further declines likely to be reported in Q2.

Therefore, one might expect that people would be relying on their credit cards more than ever.

At the same time, the BEA found that the U.S. personal savings rate was nearly twice as much in May (23.2%) as it was in March (12.6%), suggesting that many consumers are taking a cautious approach to using their money. 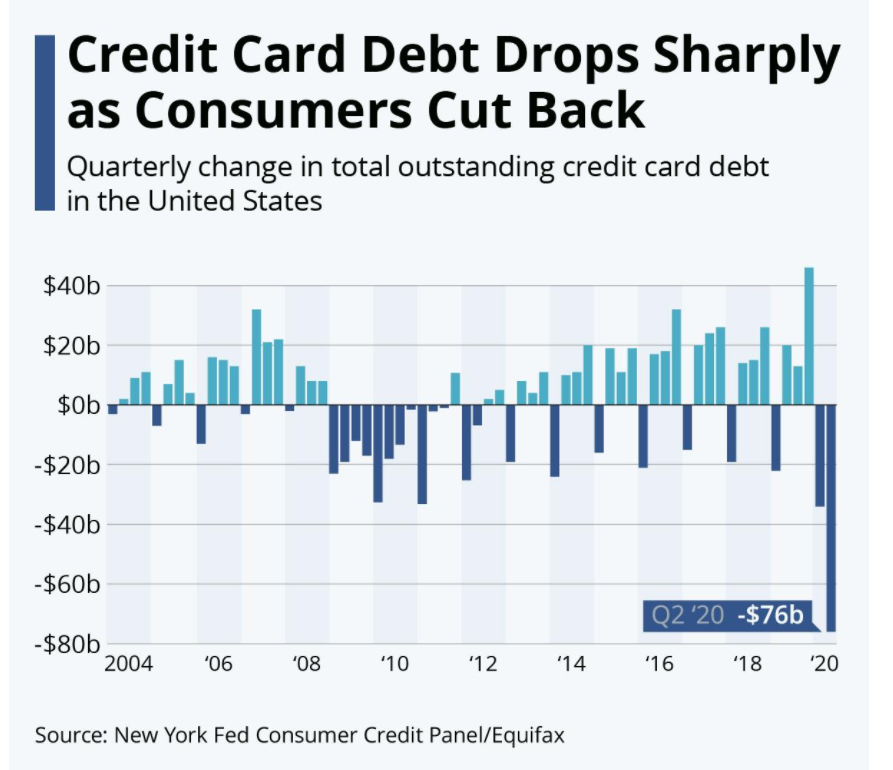 The drop-off in consumer spending during the lockdown has resulted in an unprecedented drop in credit card debt, which more than made up for a $63-billion increase in mortgage debt.

As the above chart shows, outstanding credit card debt dropped by $76bn in the three months ended June 30, marking by far the largest decline on record.

The previous record had been set in the first quarter of this year when outstanding credit card debt had declined by $34bn due to seasonal effects exacerbated by early signs of decreased consumer spending due to Covid-19.